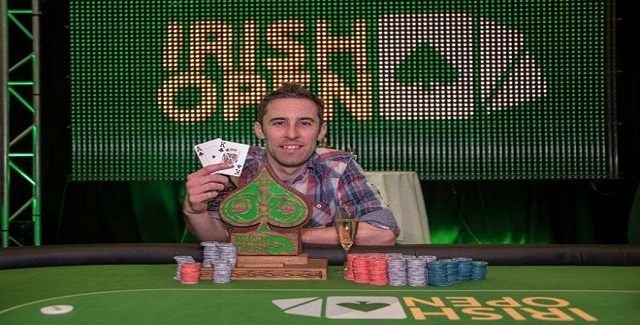 Daniel Wilson won the prestigious 2016 Irish Poker Open and took home a very good total of €150,000 as first prize. Wilson defeated Michael Conaty, who got his share of amount €85,000. This is one of the best poker festivals in Ireland and is very popular among Irish as well as UK and European poker Players. The tournament attracted 802 players, but it was Daniel Wilson who won the title.

Meanwhile Brian Nolan secured seventh position with amount €18, 000; Igor Arkhipov made €14,475 and completed the play at eight positions. Michael Rossiter was the one who got ninth place and added €12,150 to his account.

Total 14 players remained in the game at Day 4 of the Main event but just after 30 minues of play many of them got busted. The players got busted from final table were Rokas Barzdzius and Stefano Vellisario.

The first elimination from the final table of two players i.e of Michael Rossiter and Igor Arkhipov, due to wilson’s pocket aces.

Then it was Brian Nolan who took the path back to home after almost 70 minutes of play. He finished at seventh for total winning share €18,000. Petr Vejmelka and David Costello were looking good before a move on big blind and it was Michael Conaty, who called and put both the players at unrest. David Costello was the fifth position holder for €28,500.

The heads up takes in between Daniel Wilson, who won the tournament for €150,000 and Michael Conaty, the runner up who took home €85,000.