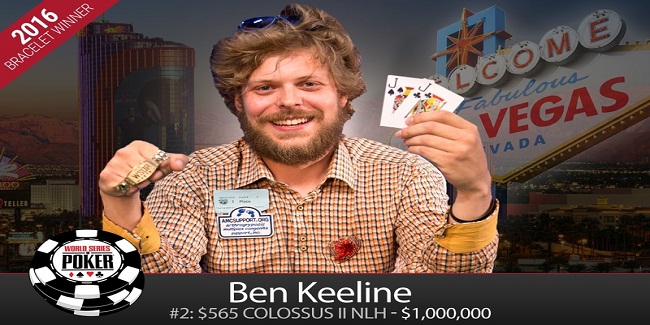 This could only happen in World Series of poker. Benjamin Keeline, a pro poker player from St. Louis, and a part time Uber taxi driver has won the prestigious Colossus II event for $1,000,000 at WSOP 2016. This was a $565 buy-in No Limit Holde’m event, to which the player did his great.

Keeline was playing great since the game begen at the final table. He maintained the chip lead against his opponents and that is why Jiri Horak of Czech Republic, complted his journey to second position with total winning share of amount $618,000. This was the second cash at WSOP for the Czech poker player.

Third, fourth and fifth positions of the event Colossus II was for players named as Farhad Davoudzadeh ( a WSOP debutant with total $462,749), Richard Carr with total winning share $348,462 and Marek Ohnisko of Czech Republic for $263,962.

Meanwhile Christopher Renaudette was at sixth place with total amount share $201,151, and Alex Benjamin from San jose was seventh place for an amount win $154,208.

A New Yorker Jonathan Borenstein was at eighth position and was second in leaving the field. He collected $118,937, being eighth. This was his biggest WSOp cash win till date.

The first elimination from the top 9 players was of Xiu Deng from Las Vegas, who collected a sum of amount $92,291, being the ninth player of the colossus II, at WSOp 2016