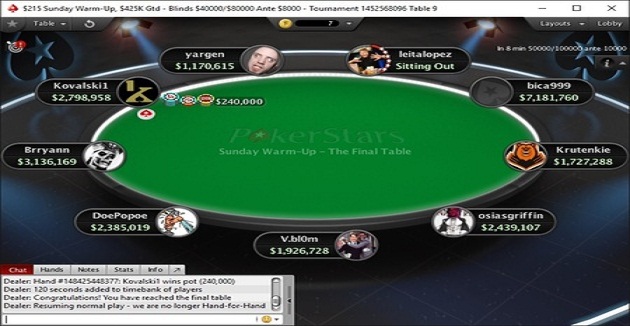 Romanian bica999 has won the week long Sunday Warm up event and collected the the first prize of $75,050. It was the fastest final table took place and completed in just 20 Minutes of the second hour of the final table.

bica999 won the championship and the first prize of $75K, by defeating a pro from Brazil ‘Kovalski1”, who took home his share of an amount $56,368, whereas the third place of this Warm Up event belongs to ‘osiasgriffin” of Austria, who made $40,375 while playing/participating to this event.

Total numbers of entrants to this particular event were 2,357 out of which top 342 places were paid, whereas the total prize pool was $475,000.

Top 9 Final Table players as per their seats are s follows:-

bica999 was doing really well since the game started and was leading the chip nearly seven million in chips, way more than opponents.