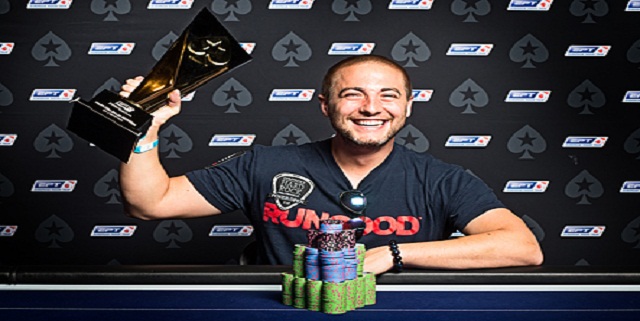 A professional poker player from the United States named Chance Kornuth has won the prestigious €10K High Roller event at European Poker Tour season#12. He collected the first prize of amount €351,108 by defeating Philip Gruissem of Germany who took home €299,162 as winning prize. The tournament attracted 214 players out of which 164 were unique and 50 were re entrants. The total entries generated a hugh prize pool of amount of €2,075,800 distributed to finalists of the event.

This particular event of the tournament i.e. High Roller took place at Monte Carlo Casino to which Chance Kornuth, Philipp Gruissem and Sergey Lebedev of Russia were the first , second and third prize winners.

As mentioned earlier total 214 players participated to the event ut of which 164 were unique players. Only 26 players were remained in the business to win the title of the High Rller on day 2 of the event.

The first elimination from the final table was of Russian Dmitry Yurasov, who booked for a prize of amoun €54,180 and completed at eight position. Next couple of hands eliminated two more players that is Filipe Ramos of brazil for seventh osition with €74,100, and Anthony Zinno of united states with sixth position for a winning share of amount €101,500.

Some more players had to hit the rail such as Murad Akhundov of Azerbaijan, who collected €133,680 and completed at fifth place, whereas the fourth position of the event belongs to a player from Germany and a top poker professional i.e. Fedor Holz, who made €169,000 from the EPT#12 high Roller. Holz was playing really well but could not be able to move above fourth position.

The next man to hit the rail was a Russian Sergey Lebedev for an amount €292,750. It means the heads up round was in between Philip Gruissem of germany and the Us player Chance Kornuth and ultimately Kornuth won the championship title and collected the winning prize which was €351,108.