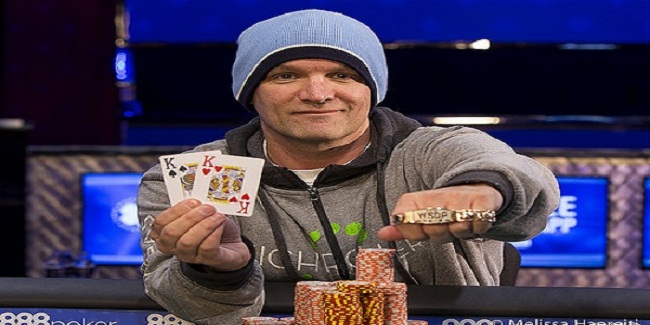 Christopher Sand has won the event#1 of the prestigious 47th world series of poker 2016. The event took place at Rio, in Las Vegas and was a $565 buy in No Limit Hold’em for casino employees. This was the first gold bracelet out of 69 scheduled for this summer. Sand is a casino employee and a pro poker player. He participated along with 730 other entrants/casino employees, but it was sand that played great till the end of the game and collected the first prize of amount $75,157.

Sand is 45 years of age and loves to play poker games. He currently is a cashier at Caesars Palace. Sand was very happy after winning the first ever gold bracelet at any WSOP tournaments, last year he finishes for 1,596th place in event named “Colossus I”. He credits his victory to his late Mom and said that she was the one who taught me how to play poker at the age of 13 and after 30 long years I proved that I can play poker with good hands.

He also said that he loves to play Stud poker games because he started playing seven card stud back in 2003, but now thinking playing Hold’em after collecting the bracelet.

Kerryjane Craigie, a poker manager of United Kingdom the runner up of the event and took home a handsome amount of $46,420 as winning share.

Michael Coombs of United States was the third position holder of the WSOP Event#1 with total amount $32,249.

Spencer Bennett, another US poker player finished at fourth place with total winning share $22,753, whereas the fifth, sixth and seventh positions were for Brian Mikesh ($16,308), from little Canada united states, Tom Ratanakul ($11,877) of Las Vegas and Nicholas Sliwinski ($8,792), of Las Vegas, United States.