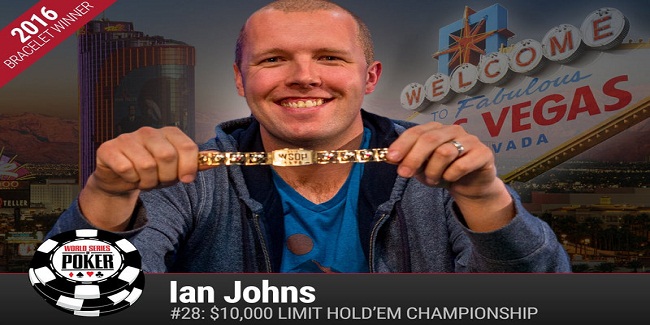 A Seattle based pro poker player Ian Johns wins the event#28 or $10K Buy in Limit Hold’em of World Series of poker 2016. He collected an amount of $290,635 as total wining prize. This was the second gold bracelet win for the player in this particular series of poker, whereas third of the career. Sean Berrios of the United States was the runner up of the event.

The event attracted 110 players and generated a total prize pool of amount $1,034,000, which was distributed to top 17 players/places. Johns was very happy and said that for me, Limit Hold’em is a great game; it is fun and it just gets going and gives me immense pleasure of playing it. It is very fast.

I am very happy with the results. He also said that I used to play lots of No Limit hold’em games, but somehow not loving it since months and that’s why I started participating in Limit Hold’em games, which is quick and do smooth for me.

This was his 20th cash of world series of poker, out of which he has been through 5 final tables and collected three gold bracelets, with total life time earnings goes to over a million now ($1,009,023).

Final Nine players along with their winning prizes:-

Second place: Sean Berrios of Caribbean paradise was the runner up and collected $179,635.

Russian Alexander Balynskiy was at third place and received $125,571. Balynskiy is an online poker player but playes on brick casinos time to time.