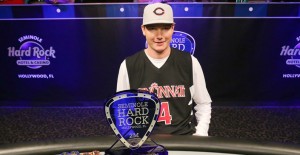 “Rock n Roll” poker open. He won the championship trophy and collected a cash prize of $568,687 of the $2 Million guaranteed tournament. Bazele is an online poker as well and playing at various online tournaments he has made more than $3 million. He has been a very successful poker player whether it is online or at live offline poker tournaments.

Bazeley defeated a player of Orlando (USA), David Prociak who just made $10,000 in his whole career of playing poker since 2007. Prociak was doing well but ultimately Bazeley done the job in a better manner.

Bazeley was very happy winning the best shot of his poker career and told reporters that I am getting some more respect now. I really feel that you if you won more titles, the respect you get is definitely more. It really feels nice to me that I’m the winner of one of the most prestigious award, he added.