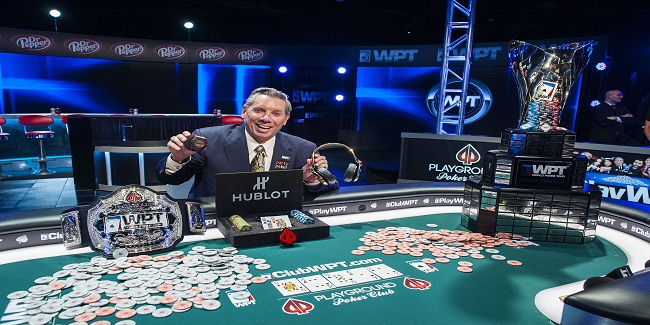 Mike Sexton, the legendary commentator of the world poker tour is the new champion of WPT Montreal main event.

This is the first ever WPT title for Sexton. He took home a good total of amount C$425,980 or $317,896 USD as first prize from Playground poker Club, Montreal.

The prestigious tournament attracted 648 players from different parts of the world including United States, Canada and Europe.

Sexton defeated Benny Chen in heads up round. Top two players battled for 157 hands in heads up round, but it was sexton who didn’t made any mistake till the end and selected as winner, while Chen pocketed C$286,110 ($213,515 USD) from the tournament for his second position.

Mike Sexton played like a champ, since the beginning of the game and never got off from the record.

Sexton also got a free seat of buy in $15,000 to the season-ending WPT Tournament of Champions.

Out of which Mike Sexton was the chip leader when entered to the final table, while Ema Zajmovic was the second in chip cunts.

The first player who hit the rail on final table was Jake Schwartz, who pocketed an amount of $61,000 USD or C$81,740 and completed his journey being at sixth place.

Fourth and third positions of this game belong to players named as Ilan Boujenah and Nadir Lalji and they received winning shares of amount C$132,750 and $183,320 respectively.

Now as four players eliminated top two remained in play for heads up round. It took more than 150 hands to decide that who would be the winner of this Canadian poker championship and it was Mike Sexton, who made no mistake to collect the trophy and first prize of amount C$425,980.