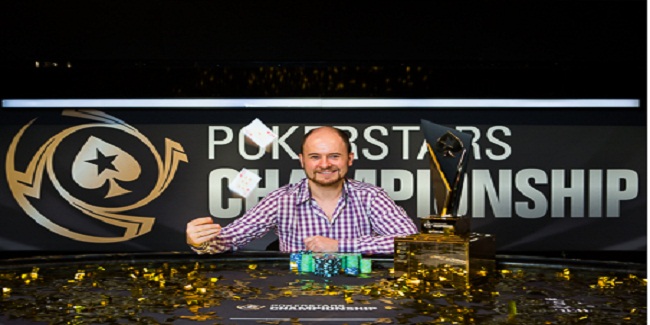 Pavel Shirshikov of Russia is the winner of prestigious PokerStars Championship Sochi Main event. The player collected first prize of amount $514,895 from the tournament and topped a field size of 387 players.

The runner-up of this event was another Russian poker player who was PokerStars qualifier named Vladimir Troyanovskiy and he pocketed a sum total of amount $326,454 from the tournament for his second place.

The tournament took place from may 25 to May 31,2017 and it attracted 387 players worldwide. The tournament generated at least $2.65 Million as total prize pool. Meanwhile the buy-in of the event was approx. $5,590.

Pavel Shirshikov is a 30 year old professional poker player from St Petersburg and he took down the first major PokerStars championship held in Sochi, Russia.

Then a player from Kazakhstan named Daniyar Aubakirov hit the rail to seventh place. He busted to 7th place and collected a winning share of amount $86,524 from this particular poker tournament held in Sochi.

Sixth, fifth and fourth positions of this tournament belongs to players from Russia, Kazakhstan and Russia and they were Timur Bubnov Russia PokerStars qualifier (US$116,250), Lavrentiy Ni (US$151,018) and Dmitry Vitkind(US$190,830).

Shirshikov was very happy after winning this first evenr PokerStars championship. H said that “I am very happy with the results and I am very amused that I have won the first Major pokerstars Poker Championships”, my friends believed that I can do it and I am happy that I was able to lift the trophy, he added.

Iranian Seyed Ghavam completed his journey being third position holder in this match, who then pocketed a sum total of amount $235,949 from the game.