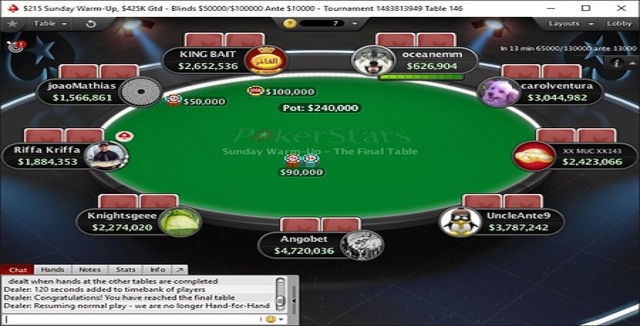 The 6th March 2016 Sunday Warm up presented by PokerStars received 2,322 entries and generated a prize pool of amount $464,400 besting $425K guarantee Prize pool. Riffa Kriffa of Nederlands played well till the end of the game and won the first prize of event for an amount $73,375.

Top 342 places were paid out. He was playing very well and defeated a guy from Canada UncleAnte9, who got his winning share of amount $55,110.

The final two tables of this event were set after eight long hours of play and when most of the entrants got busted. Vicenfish, The WCOOP Event#23 champ back in 2014 hit the rail just before seven minutes of final table and got his seat at 11th position.

Top nine finishers and final table participates were like:-

The eliminations were as follows:-

XX MUC XX143 got busted against Angobet t nineth position and got $3,947 as winning share. oceanemm was other player who hit the rail for amount $6,733 and was at eighth position.

KING BAIT of Canada finished his journey at seventh position and made $11, 377, whereas te next man who hit the rail was Knightsgeee for sixth position and $16,021. .

Carol Ventura walked away with $20,665 and was at fifth position in tenth hours of the game. Brazilian João Mathias Baumgarten was almost in top three but concluded at third position with an amount won $27,167. He was doing well against top players with short stack to 1.3 million.

The third place of the event belongs to Angobet and he got $55,110 meaning top two were players like Riffa Kriffa and Canadian UncleAnte9.