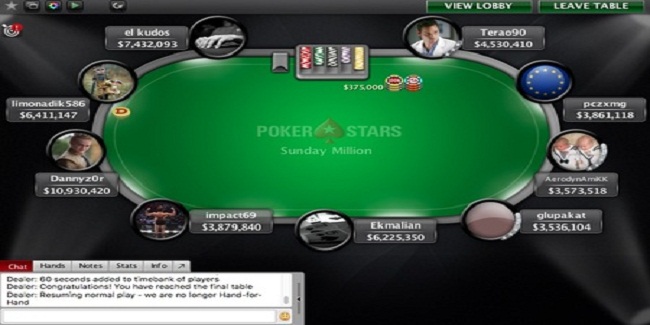 An online poker player from Romania Dannyz0r is the latest winner of Pokerstars Sunday Million took place on 11-27-2016. The winner pocketed a good total of amount $143,420.37 as first prize.

Greek player Ekmalian becomes runner up of the game and made $100,645 from the event. The tournament received 5,038 entries and generated $1,007,600 as total prize pool. Top 692 places of the game took home some amount of money.

The final table of this particular Sunday Million included top 9 remaining players. Zolta3D was the last man who got bused and couldn’t make to the final table.

First elimination from the game was of a player from Denmark named AerodynAmiKK, who received an amount of $8,436 being at ninth position, while next man hit the rail was Mexico’s impact69 for $12,021. He got out just after a few hands took place.

Seventh, sixth and fifth positions of the Sunday Million goes to UK’s el kudos who received $17,130 for seventh, glupakat of Bulgaria who made $24,410, and pczxmg of Belgium who got $34,783 as winning total.

Brazilian Terao90 was able to make $49,565.95 from this tournament and was satisfied being fourth place.

If you would like to have your sign up account at any top level online poker site of UK then you are at a great place.