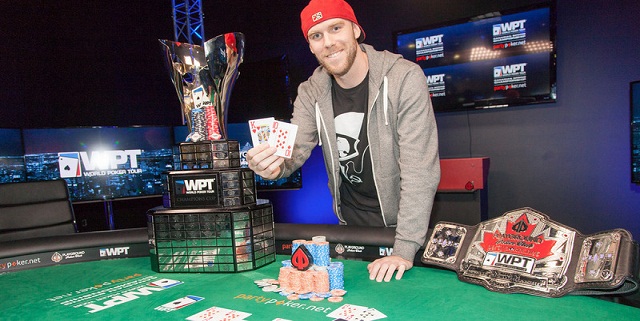 The tournament attracted 417 players from different places of the world and generated a cool prize pool. All time money for the Canadian poker professional is now exceeds to $291,560 which includes best live cash of amount $59,100 for event#22 of the $2,250 No Limit Holde’em at 2015 Seminole hard Rock casino and resort. He has also done a very good job at many other poker festivals and collected good amount of caches.

As mentioned earlier the tournament attracted hugh number of participants but only 6 players were remained in the business and were looking to win the championship on the final day of the Main event.

The first elimination from the table was of Tony Dunst, a top professional poker player of Canada. He got eliminated from the final table after few hands of the play took place and collected CAD $51,400 as winning total.

The next man to hit the rail was Guillaume Nolet for fifth position for a total winning share of amount CAD$64,160.

It was Thomas Taylor who got out from the playing arena to fourth position with total winning share of amount CAD$85,460.

The three handed game included players like Joel Miller, Ruben Perceval and Seth Davies. Joel Miller moved out with a handsome amount of CAD $115,570 and booked his seat to third position of the even.

Meanwhile Ruben Perceval becomes the runner of of the final table main event and made CAD $180,088, whereas Seth Davies leaded the way towards the ending point and did right that he wants to. He collected the title of the Canadian spring championship along with the first prize, which was a very cool CAD $274,540.