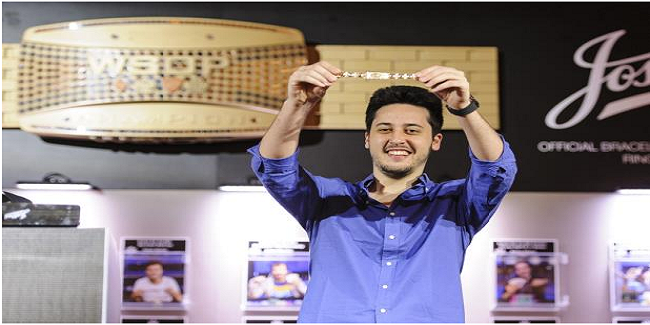 The 21 year old guy and a professional poker player from Spain Adrian Mateos have won the event#33 of the prestigious world series of poker 2016. He collected the first prize of amount $409,171 beating 1,840 entrants, which generated a cash prize pool of amount $2,484,000. Top 276 places of the event were paid. The game was for $1,500 buy in SUMMER SOLSTICE” No Limit Hold’em, to which the Spanish player done well at the end of the day and collected the title of the championship.

This was the second gold bracelet win for the player; the first was back in 2013. He has been through 2 final tables and had won both times a gold bracelet. He has 5 , WSOP cashes in his pocket till date and total earning for the player, playing at different world series of poker is now grown up to $1,836,922. Mateos joins fellow countryman Carlos Mortensen, in terms of winning two gold bracelets. The runner up of the game was an Austrian player named Koray Aldemir, who took home $252,805.

Mateos was the happy guy at the table and said that I always wanted to win, whenever I play and if somehow I can’t win, I learn things which can improve my game in future. He also said that it feels great when you win a title against top poker professionals of the world, I’m happy that I did it.

SUMMER SOLSTICE is the new game offered to players at this particular WSOP series. It is designed to take the advantage of the dates. By the way, the tournament became very popular I the public and attracted more than thousands poker players from around the world.

Italian Alessandro Borsa was booked for the third place and collected $182,835 as winning prize.

Meanwhile seventh, eighth and ninth positions were for Ronald McGinnity, from Kingston ($55,455), Stephen Ladowsky, from Toronto ($42,252 ), whereas a UK player David Tovar comes ninth in the list for $32,540.