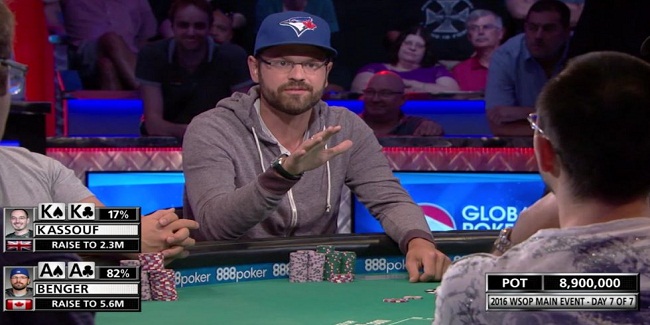 William Kassouf, an English professional poker player and Griffin Benger have a heated confrontation at the world series of poker championship main event.

Kassouf is known to be a rude person among his fellow poker players and what he did at main event of the world series of poker went viral.

Kassouf uses his mouth to take the advantage over Benger, who was quiet for all the time against his and that’s why Kassouf a very polarizing player in the poker world.

The incident took place when Benger holding pocket aces deep at the final table of the game and raised Kassouf to $5.6 million, which was responded rudely by Kassouf. He asked Benger, what he should do in the situation.

That was not good. He even asked what I should do in this situation. Should I go for all –n or fold ? or should I go for a win? He further said to Benger that should I Play for the win, right? You are doing the same?”

All this was happening against Benger and he was quiet for some time and then replied Kassouf that you are an abusive person and I can’t do anything for that. Man its not funny and it’s a game that you are me are playing. You are bully and you should do things in amanner. It very mea I would say”.

After this reply from benger Kassouf defended his action by saying that “it’s called speechplay”. Kassouf finished his journey in game being at 17th place and collected more than $300K as winning.