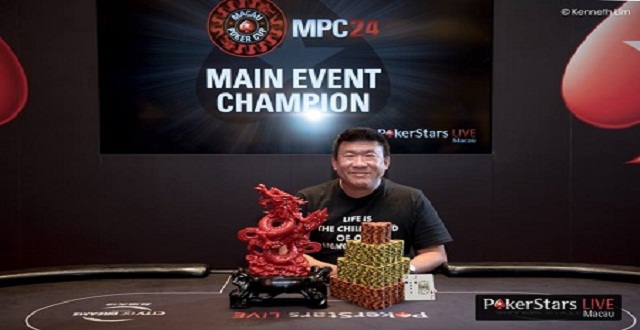 The final table included some of the top poker pros of the region such as former Red Dragon champion Tom Alner and another starts team pro Wayne Zhang.

The first elimination from the table was of Yongqiang Huang of china after 90 minutes of the game took place. He finished at ninth position for his share of amount $190,000. The next casualty was of Tom Alner of United Kingdom and a Former Red Dragon champion) got busted playing against Yang Zhang and Wayne Zhang. Unfortunately Alner failed to improve when community card down and finished at eighth position for $223,500.

It didn’t take so long for Yang Zhang to hit the rail and end his journey at seventh place and he got eliminated just after 15 minutes from Alner’s removal with an amount take home $257,000.

Another Chinese Fan Xie was at sixth position and collected HK$302, 100, as winning share. Meanwhile Chengbei Lei was another player got busted against players for an amount $413,000.

The 4th position of the MPC24 red Dragon belongs to Liang Xu and he made $611,000 from the tournament’s main event.

Japanese Takashi Ogura was the next player who caught in the middle and fell short against other two. He was able to get $1,382,000 as winning share.

The heads up round took place in between Ying Lin Chua of Malaysia and Wayne Zhang of china.