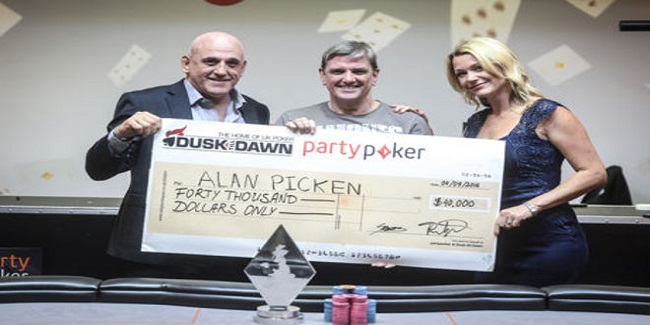 Alan Picken, a player of the United Kingdom takes down the title of Grand Prix Poker Tour, took place at the Cardiff City Stadium. Picken collected the first prize which was $40,000 and of course the title of the championship.

The tournament attracted hugh number of players but only 215 were able to progressed from the online venue and from live day 1, but it was Picken, who did a superb job and defeated some of the most renowned poker players of British poker circuit such as Dewi James, Leigh Wiltshire, Dan Owston and Paul Jackson.

Top ten players remained in the business and were eyeing to win the title, but then Carl Collins and Soheil Khorram got busted to ninth and tenth position and were out from the final table race.

The final table was set and players like Daniel Hamblin, Adrian Ko, Josh Veasey and David Morgan were in the field.

The first player who hit the rail in final table on Day 2 of the Grand Prix Poker tour in Cardiff was John Hird who made $4,000 from the tournament and was at eighth position.

Neil Wyatt was the one who busted to seventh place for a total winning share of amount $5,000.

David Morgan collected an amount of $6,500 and finished his journey to sixth place, while Christopher Alexander becomes the next or fifth position holder for a total $9,000.

Josh Veasey made $12,000 from the tournament and was at fourth position, whereas Adrian Ko collected $16,000 and finished the journey, being third.

Alan Picken had the majority of stacks with him and was doing really well in heads up round, and somehow Daniel Hamblin never managed to recover from the stress given by Picken and was completed his journey to second position with a winning share of amount $24,000.