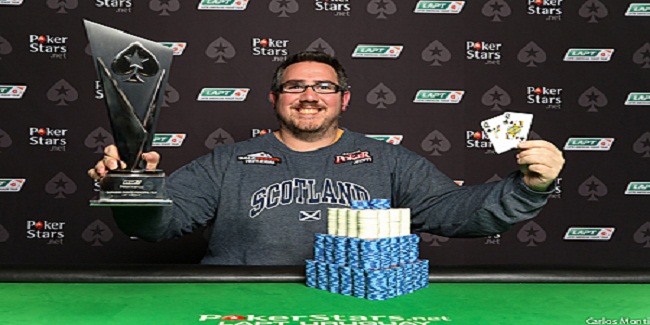 Pedro Claus, an Argentinean professional poker player is the new winner of Latin American Poker tour season#9. The main event of the tournament took place Uruguay, which attracted 438 players from across the Latin world and mainly from Brazil, Uruguay and Argentina and generated a prize pool of amount $571,590. Top 63 finishers of this main event were paid out.

It took four to five days to announce the winner of this prestigious Latin American poker tour. Pedro Claus was the one who made no mistakes and played really well till the end of the day, to claim the championship title, besides there were a lot of player who have played great poker in their career such as Mario Lopez, Oscar Alache and Ruben Barros, the finalist but it was Claus who made the difference and took home most of the prize pool money.

It was Brazilian Marco Oliveira, who hit the rail because of chasing deuces into Ruben Barros’ pocket kings. He was out to eighth position for $13,040.

Next man to go was Cristian Andres Rotondo, an Argentinean who made $18,340 from the tournament, being seventh. He was busted by Nicolas Pernigotti.

Ruben Barros was out from the table and collected $24,400. He finished at sixth place.

Fifth, fourth positions of the LAPT season#9 belongs to Nicolas Pernigotti (Argentina) and Sergio De Benedictis(Argentina), and they made $24,400 and $31,160 respectively.

Now top three players decided to have a deal in between them, because of no results were showing after many crucial hands.