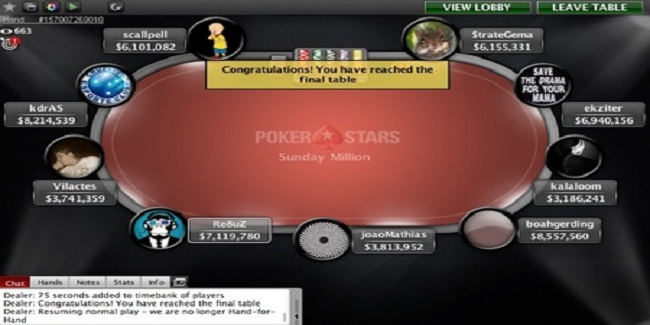 A pro poker player from Argentina named Vilactes has won the latest edition of $215 buy in No Limit Hold’em Sunday Million event, played at 8/7/16 on PokerStars. The winner took home a handsome amount of $131,000.

The event is one of the most popular at the internet. The event received 5,383 entries and generated a cash prize pool of amount $1,076,600, which was distributed to top 764 finishers of the game.

There were 18 players remained in the business after 11 hours of game completed and final nine players were as follows according to their seat allocation:-

First elimination from the final table was of Estonian kalaloom, who made $8,504 from the tournament and finished his journey at ninth position, just after 20 minutes of the game took place. Brazilian João Mathias “joaoMathias” Baumgarten, hit the rail after five minutes and was able to collected $12,205 being eighth position holder.

Then goes Anton “ekziter” Astapau from Belarus playing against his opponents. He played well but could not kept the momentum and got out with total winning share of amount $17,517.

The game was in 13th hour of play and just after a few hands a German player named boahgerding hit the rail to fourth position and collected $51,784. The five community cards were T♣Q♣2♦2♣T♠.