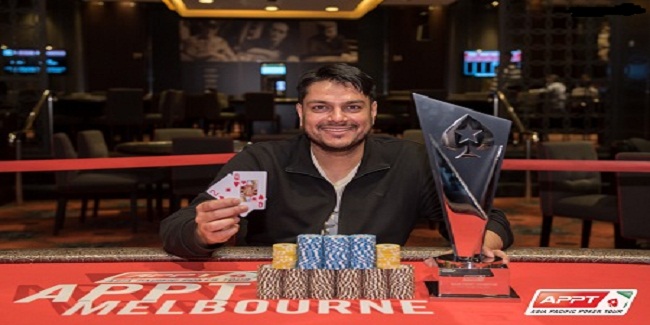 Ashish Gupta, a pro poker player has won the latest Asia Pacific Poker Tour season#10 and took home the first of amount $124,191 in a four handed deal along with others.

Meanwhile the runner up of the event was Raymond Ou, who received a good winning share of amount $136,535 from the deal.

Total 523 players participated in the main event of Asia pacific poker tour season#10 Melbourne, but it was Gupta, who made no mistakes and was in the game from the first day of the main event and from the beginning of the seven handed final table.

The first elimination from the final table was of Ben McLean, who collected $30,550 and completed his journey being at seventh place.

Next man to hit the rail was Tu Lan, who received $37,525 from the tournament and was at sixth position.

After a few more hands Shawn Lee was out from the race of becoming the champion of APPT#10 and pocketed $47,175 from the tournament. He was at fifth place.

Now the game began from here. There were no casualties taking place from the table and then it was deceived to make this using a four hand deal. Jay Prasad, the man who ended at fourth leaved $20,000 for the eventual champion.

Jay Prasad collected $175,000 and out of the race being fourth. The heads up in between Gupta and Raymond Ou and they decided to chop $20,000 up. Trung Tran was at third place for a total winning share of amount $107,313.

Gupta had a very good chip lead over Raymond Ou and it was more than double and until Ashish Gupta was decided as champion, he never lost his cool. Ashish Gupta collected $124,191 for first position while Raymond Ou collects $136,535 for second position.