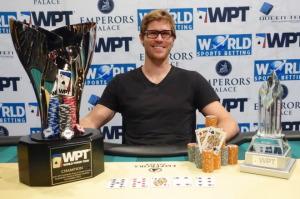 from 30th October 2015 to 1st of November 2015 at one of the top casino places in the world and in Johannesburg, South Africa, to which a pro poker player from the native country (south Africa) named Ben Cade did a great job and won the championship as well as took home first prize of Approx $1, 00,000 or R1, 382,000. This was the Season# XIV of the Emperors Poker Classic tournament.

Total number of entries to this particular main event was 135 which generated a cash pool prize of R4.3 million. The buy to the main event was R36, 000 or approx $2,600. For Cade this was the largest poker tournament to which he has done really well by winning lots of money ($100,000). The last big cash out for Ben was $26,143 at WPT Emperors Poker Classic for the previous year 2014.

Here are the details of players who did well and took home some handsome amount of money:-

The winning gives an advantage to Ben Cade as well. He is now eligible to participate in one of a top game of year ending WPT Poker Championship to which the buy in is $15,400.

Cade was very happy and excited after winning his careers best and largest poker tournament. He was able to do this with not having so much stress on him and it was really nice to see him playing intelligently.