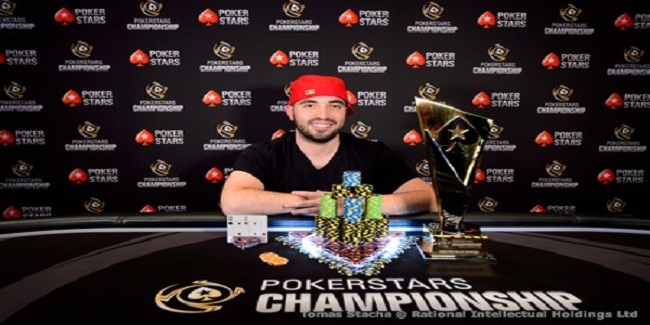 Bryn Kenney, a professional poker player from the United States has won PokerStars Championship super High Roller of buy-in 100,000 and pocketed € 1,784,500 from the tournament.

This particular Super High Roller was a part of PokerStars Championship presented by Monte-Carlo Casino. The tournament took place from April 27-29, 2017 and it attracted 61 players (including 14 re-entrants). Total prize pool for the tournament was a massive €5,948,415.

Russian Viacheslav Buldygin became the runner-up of this super high Roller and collected a sum total of amount € 1,290,800, while third position of the match belongs to a pro poker player of Canada known as Daniel Dvoress and he pocketed € 832,800 from the tournament.

Bryn Kenney is a 30-year old pro from New York, America. He has won many other Super High rollers as well. Last time he participated among PokerStars Caribbean Adventure and finished third. The buy-in for that tournament was also $100,000.

The first player who busted from the final 8 players was Sam Greenwood of Canada. The player busted to eighth place and pocketed a sum total of amount € 237,950 for the same.

Martin Kabrhel of Czech Republic hit the rail to seventh place. He collected a sum total of amount € 303,350 from the tournament for his seventh place.

Meanwhile David Peters of USA did well but not enough to be in top 3 positions. He busted to fourth place and pocketed € 630,600 from the game.

Bryn Kenney was a very happy guy to complete the job. He said that ‘it is always important to play PokerStars hosted tournaments”, they are fabulous. I am very happy at the moment to be the part of winner side.