A pro poker player from California, Alex Masek has won the $365 No Limit Hold’em event at WSOP Circuit and took 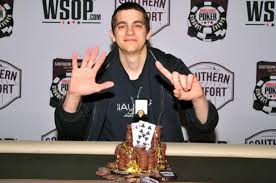 home a cash prize of $12,000. This is his 9th Gold ring at the circuit and is a record at WSOP. Total number of entrants to this particular event was 143 but Masek topped the field. The event $365 No Limit Hold’em played at Bicycle casino.

As mentioned earlier this was the 9th gold ring of Masek, his 8th gold ring came in march 2014 at Lumiere Place in St. Louis and since then he was doing a lot of hard work to get another bracelet/ring but not succeeded. Somehow he managed to win this ring for him and created a history of winning 9 gold rings at World Series of poker. The runner up of the event was Erick Lee.

“I was doing a lot of hard work to make this possible and tried to forget all the things that people have said about me”. I was not happy at all. I do not like to make wrong decisions and that is why I was disappointed, Masek said after this great 9th ring victory.

This was the seventh gold ring out of 12 being scheduled at bicycle casino. The event was $365 No Limit Hold’em which attracted 143 players/entrants. The total cash pool prize generated by all the entries was $42,900 and it was distributed to top 15 players of the game.

This is the seventh of 12 gold ring events on the WSOP Circuit schedule at the Bicycle Casino. The $365 No Limit Hold’em attracted 143 players. The total prize pool came to $42,900. The top 15 finishers were paid. Total earning for Alex Masek is now crossed $607,288 from his 47 career playing. Check out latest poker updates and details here at realpokeronline.co.uk.