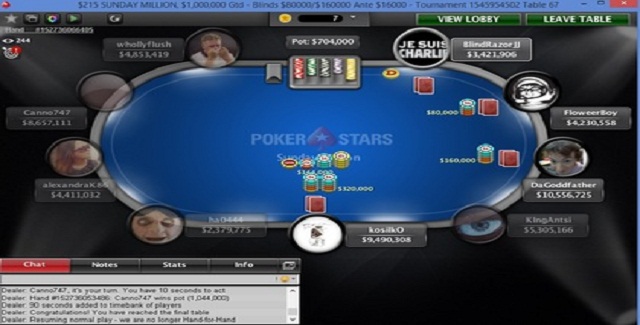 This is simply superb. A pro poker player of Canada named DaGoddfather  has won his second title of PokerStars Sunday Million and collected the first prize of amount which was $168,945. The first Sunday Million Prize of the player was back in august 2011.

The player defeated whollyflush of United Kingdom who took home the amount of  $125,843 being runner up. The $215 buy in event attracted 5,401 players from the world and generated a hugh prize pool $1,080,200. Out of total entrants top 810 places were paid.The final table was decided after many hours of game completed and eliminating more than 5,392 players.

The final 9 finishers were as follows:-


The first elimination from the table was just after a couple of hands of playing. It was a Polish player named FloweerBoy, who hit the rail to ninth position for a winning share of amount $8,641.

kosilkO of Belarus got busted to eighth position playing against the winner DaGoddfather in a close game and made $13,502 from the weekly poker tournament.

KIngAntsi of Finland although having two flush but caught in trouble because of DaGoddfather hit the flop with kings and sixes, meaning KIngAntsi had to hit the rail for seventh position with total winning amount $24,304.

Lebanon’s ha0444 did not returned in the game after getting stuck in between top players with total $35,106 for sixth position.

alexandraK86 of Sweden made $45,908 from the tournament and completed his playing at fifth position, whereas Australian Canno747 made $61,031, being at fourth position.Top three remaining players were BlindRazorJJ of Uk, whollyflush of UK and DaGoddfather.

The three handed games lasted for just three hands when BlindRazorJJ got eliminated to third position with total winning share of amount $88,954.

The heads up round was in between:-

The game lasted to at least 38 minuted to decide whether Canadian DaGoddfather or whollyflush of UK will be the winner and it was DaGoddfather, who played great til the end of the game and defeated his closest opponent to collected $168,945 as winning prize and second time Sunday Million Title.