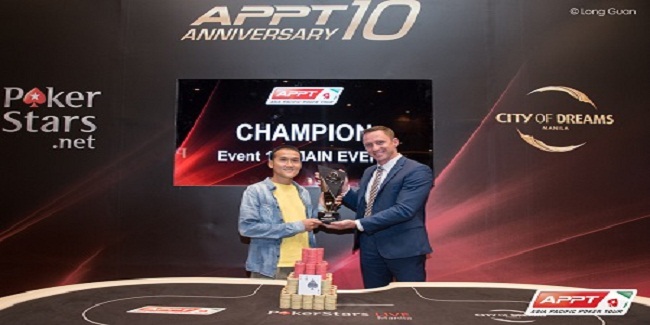 A professional poker player from Canada named Linh Tran has won the prestigious Asia pacific poker tour Season#10 Main event played at Manila inside the city of Dreams. The winner collected a trophy and a hugh amount of ₱6,135,000 as winning prize. The runner up of the event was Sam Razavi, who was looking good at the moment but couldn’t be able to convert and completed his journey with wining share of amount ₱3,466,000.

All eyes were on Jessie Leonarez, a third position holder of APPT#9 and a chip leader of the Day 3 in this season as well, but despite being chip leader on the final day, the result was same for him as it was last year, he finished third.

The final tables according to the chips were:-

Meanwhile the first elimination took place at 2:50pm local time and it was of Bruno Tzu Chieh Lo, who finished for ninth place and collected ₱492,450.

Then goes Joven Huer, who made ₱738,000 from the tournament and collected at seventh position, at level 25.

Jesse Leonarez, a third position holder for last year’s season again hit the rail and maintained that position of third for ₱2,139,000.

At the final or Heads up round Trans got A♠A♦, whereas Razvi had A♣2♣ with him, meanwhile the flip landed was 8♣2♠8♠.