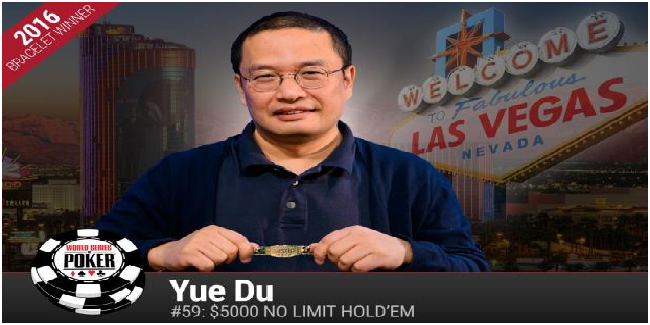 A Chinese investor and a professional poker player named Yue Du, has won the event#59 of the prestigious world series of poker 2016. The game was of $5,000 buy in No Limit Hold’em Event, and received 863 players from the globe, and generated $4,056,100 as prize pool.

The 48 year old guy is a venture capitalist and loves to play poker at big tournaments. The $5,000 buy in No Limit Hold’em event, players over for four days and night and completed at the main stage of the ESPN, at Rio in Las Vegas. The tournament is very popular among global poker professionals and hence attracts hundreds of players from the entire world.

Fourth, fifth and sixth positions of the game belongs to Dominik Nitsche, a 25 year old guy from London, United Kingdom, who made $248,640 from the event, Ismael Bojang, a German poker pro collected $179,923, being fifth and Marius Gierse, from Germany, collected $132,030 being sixth.

Ninth: – A player from Belgium Arne Coulier was the first player who eliminated from the final table and secured his place at ninth spot for $56,851. This was the second cash for the player at this particular series and this makes him a better poker player as well.