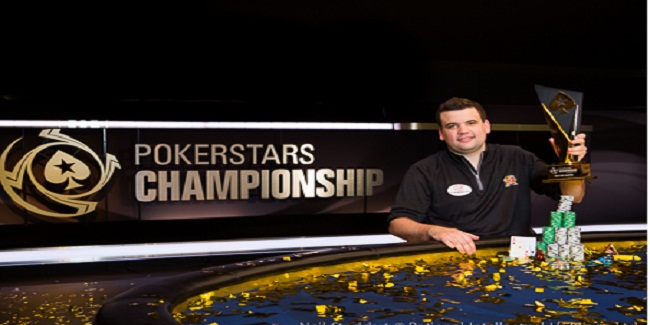 Christian Harder of the United States has won $5K Main event of PokerStars Bahamas for a total winning prize of amount $429,664 in a heads-up deal.

The heads-up of this particular main Event was played among two US Players i.e. Christian Harder and Cliff Josephy, but it was Harder who nailed down his opponents and became the winner.

Cliff Josephy becomes runner-up of the event and pocketed $403,445 from the tournament. The event which took place from January 8 to January 14 in Bahamas attracted 738 players and generated a huge total prize pool of amount $3,376,712.

Harder, the 29 year old professional poker player from Maryland knows how to play in a top seeded match, and that what he did at this Main event.

Final table started taking place with players insides named as Rasmus Glæsel, who was the first victim and busted to sixth place for a total wining share of amount $103,780.

Glæsel is from Norway and has won many titles till date, while playing at different poker tours. The next player who got busted from the final table of the main event was the chip leader of the day i.e. Canadian Michael Gentili.

He was the leading the chip with very good number, but unfortunately couldn’t make it possible for him. Gentili busted to fifth place and before than he was able to save $140,940 for him.

Russian Aleksei Opalikhin becomes next evicted player due to a great show of play from Harder, who made $191,420 from the title.

Michael Vela of USA moves out at third place for a total worth $259,980/ and now the two way game started among top two reaming players.

Christian Harder and Cliff Josephy both are from the United States, Harder did it in a right manner and became champion for $429,664, while Josephy would take $403,445*.