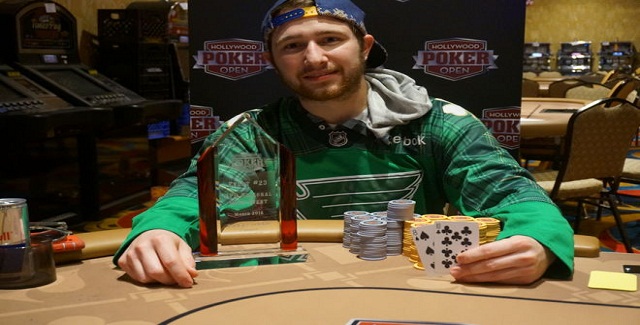 It was Cory Bogert, who played well till the end of 2016 Hollywood Poker Open and took home the first prize of amount $41,690. Bogert defeated another pro named Jeremy Scharf, who made $45,970 from the tournament. Total 257 players participated to this particular tournament.

Some notable players looking to win this title but could not make through to final table were HPO ambassador Chris Moneymaker, Kyle Cartwright and Josh Turner.

The first casualty from the final table was of Shiva Nomula, who hit the rail to ninth position with amount $6,682. Just After his removal from the game Michael Kamenjarin also got busted from the menu and took home $8,096 for eighth position.

Stephen Green secured seventh position and collected $9,638 as winning share, whereas Richard Keeling made $11,565 from the tournament and was booked at sixth place.

Don Baumer made a mistake due to Bogert and finished his journey at fifth place for $14,135. The moment baumer got out; another player Bruce Mead hit the rail for $18,247.

Bogert collected $41,690 as a three way deal and also got a seat to prestigious $2,500 HPO championship event to be held in Vegas this June. Bogart was having 203,500 in chip counts at the final day of the event and was at third in the list.

Prior to this win Bogert has had just two cashes to his name playing at world poker tour and other tournaments, but this win certainly gives him a great exposure of the game and it will add values for sure.