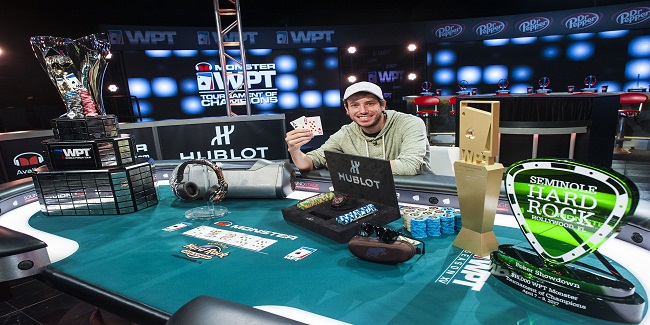 Daniel Weinman wins XV Monster WPT Tournament of Champions and pocketed a sum total of amount $381,500 from the title. Michael “The Grinder” Mizrachi becomes runner-up of the game and collected $218,000 from the tournament.

Weinman just not won the first prize, which was $381,500, but he also took home a brand new 2018 Audi S5 Coupe, a Hublot King Power Unico Carbon and Red watch, a custom premium poker table from BBO Poker Tables and a seat in Tiger’s Poker Night Presented by World Poker Tour.

He also received a one-week stay with Wyndham Extra Holidays. Weinman was the chip leader on the third day of the play. He leaded top 6 players. All eyes were on him and Michael Mizrachi, but it was Weinman who did the job and pocketed the title.

Third position of this crucial match belongs to a pro poker player named Daniel Santoro. He collected a good total of amount $133,525 from the game.

David Ormsby was the next man hit the rail. He finished his junry at fourth place for a total $95,375.

Erik Seidel was looking good at some moment and was having some good chip lead over others, but he busted to fifth place for a total winning share of amount $73,575.

Sixth, seventh and eighth positions was for players known as Dylan Wilkerson, Stefan Schillhabel and Jesse Sylvia and they pocketed $57,225, $49,050 and $43,600 respectively.

In this current season Mizrachi comes third, while he finished at third place in last season of the game. He played outstandingly well but couldn’t do well that being runner-up.

Mizrachi collected $140,450 in last season’s tournament, while his two back to back cashes at this tournament makes his total earnings to $358,450.