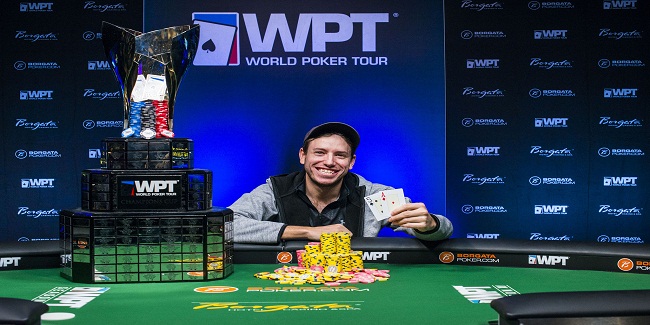 Daniel Weinman , a professional poker from America has won the prestigious world poker tour Borgata Poker open championship of buy-in $3,500 and pocketed $892,433 from the tournament.

The tournament received a total 1,312 entries and generated of $4.2 million. Top 130 spots reached the money

This was Season XV of WPT Borgata Winter Poker Open to which Weinman did a great job and took home the first prize. Nathan Bjerno becomes runner-up who collected a good total of amount $524,964 being second.

It was 29th birthday for the winner Daniel Weinman, who is playing professional poker since last eight years. This win at Borgata is the biggest for him. Now he has crossed $2 Million live earnings.

Weinman was very happy after winning this biggest live earning in his poker career. He said it’s simply huge for me because I don’t play lots of poker outside World Series of poker, but to come here and win that kind of field size is simply amazing.

Another American pro Tyler Kenney completed his journey being third and pocketed $327,578 from the game, while Jia Liu made $275,081 from the tournament being fourth.

Fifth and sixth positions were for players such as Richard Foster and Nicholas Immekus. They received $228,884 and $184,787 respectively.

The winner of this championship title will also get an automatic entry to year end tournament of champions.

First player of top six eliminated was Nicholas Immekus, who busted to sixth place for a total $184,747.

A few players who were leading the chip on Day 3 and day 4 were eliminated in early hours of play and besides their great play on their respective days they couldn’t make themselves through to the final six.