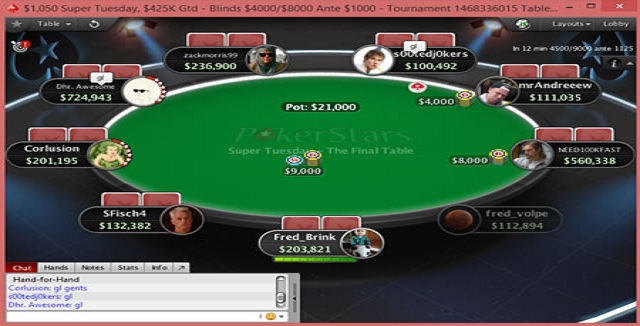 The Super Tuesday event for 2/16/16 goes to “Dhr. Awesome” of Nederlands who have done well at the end of the game and collected the first prize of amount $85,811. Dhr. Awesome defeated Corey “Corlusion” Kempson of Australia who got his winning share amount $75,034. The event $1,050 No Limit Hold’em was hosted by PokerStars. Total 481 entrants participated to the event and generated a cash prize pool of $481,000 out of which top 54 places got paid with some amount of money.

As the name suggest Dhr. Awesome is not just good but he is awesome. He played like a champ and won the title bydeating rest of the 480 players.

After nine hours of playing top 9 players remained at the final table and were looking to win this championship. The sitting plan for the players are as follows:-

This was an awesome achievement by the Dutch player who had another Super Tuesday title in his account back in the year 2014.

The first elimination from the final table was of Brazilian fred_volpe, who made a mistake and got out with his share $7,984 being at ninth place.

Zachary “zackmorris99” Morris of Mexico hit the rail and took down $10,822 and finished at eight positions. Then comes the time for Fred_Brink to got eliminated with an amount take home $15,632 for seventh place.

mrAndreeew was lucky enough to survive besides doing a few mistakes but ultimately hit the rail and finished at sixth place for an amount $20,442.