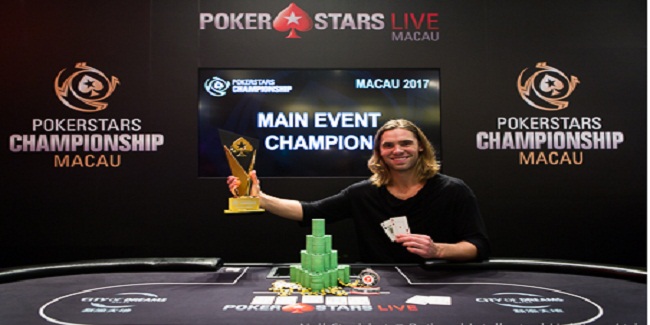 A Canadian professional poker player named Elliot Smith has won the Main event of PokerStars Championship Macau. The player pocketed a sum total of amount HKD$2,877,500 or $370,508 and a trophy.

Smith is a 29 year old guy from British Colombia, Canada. He becomes third winner of the PokerStars Championship era tonight, before him Christian Harder and Kenny Smaron have done the job.

A deal took place among top 2 remaining players i.e. smith and Tang. The deal guaranteed both smith and Tang a share of over HK$2.5 Million, after they were last remained couple players out of 536 total registrants.

But that was the starting point, because Smith and Tang played ten and a half hours in the heads-up game. This was the longest heads-up game in pokerstars championship history.

Smith was very happy after this great shot of is life. He said that “I am super, super happy, “I feel great about some of the spots I passed up.”.

Avraham Oziel of Canada who was a PokerStars Spin & Go Qualifier was at fourth place for a total winning share of amount $1,280,000.

German Aymon Hata busted to fifth place, while Pete Chen, a Taiwan    Live satellite winner busted to sixth position and made $705,000 from the game.

Seventh and eighth places of this Main Event belong to players from China and they were Yan Li and Xuan Tan for HK$521,000 and HK$386,000.