It was a great day for a pro poker player named Pratyush Buddiga of united States, when he won the prestigious €25K Single Day High Roller at EPT13 Barcelona and collected a hugh €690,275 as first prize. The tournament attracted 162 entrants out of which 138 were unique entrants.

After 15 long hours of play the winner was announced from a deal which took place in between top three survivor such as Pratyush Buddiga from United States, David Yan of New Zealand and Andrey Shatilov of Russia.

They all made a decision that Pratyush Buddiga from United States will take home the trophy and an amount of €690,275 as winning share, David Yan will take home €704,755 as his wining g share, while Russian Andrey Shatilov will collect €606,020, being third.

The three players were not interested in playing any more hands on the table and that’s why they decided to ground the deal.

Dmitry Yurasov eliminated to ninth place for € 93,790 against Yan’s J♦T♦ and Yurasov had A♦J♥.

The Chip count for final eight players was as follows:-

Meanwhile Another Russian pro named Andrey Shatilov was at seat#7 with total 3,550,000 chip counts and Alex Komaromi from Uruguay had 1,455,000 chips at seat#8.

Russian Sergey Lebedev got eliminated from the table of the Single Day High Roller to eighth position and made €117,640 from the tournament.

Alex Komaromi from Uruguay made an amount of € 216,250 from this tournament and com 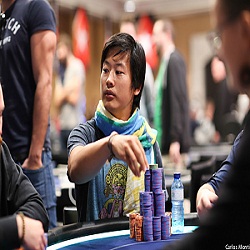 pleted his journey at sixth position.

Irish Steve O’Dwyer and German Tobias Reinkemeier were out of the race (fifth and fourth) to win the championship title, because of their respective hands. They made € 278,900 and € 347,650 respectively.

The original payouts for the top three players should have been like this:–