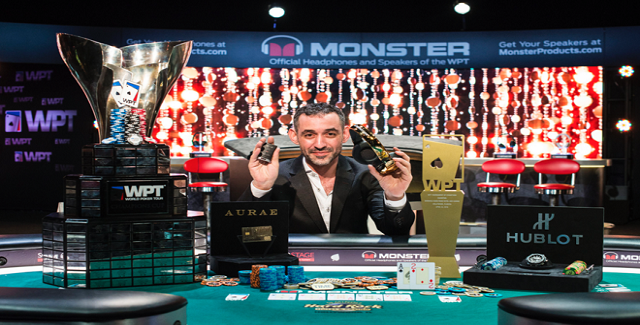 Farid Yachou, a pro poker player and a native of Holland creates history by winning one of the most prestigious poker tournaments in the world i.e. WPT Tournament of champions. The event took place on Seminole Hard Rock Hotel & Casino, to which Yachou, the chip leader of the day 1and Season XIV WPT Amsterdam champion, did a great job and won the championship title.

He collected $381,600 as first prize and the title. The runner up of the event was Vlad Darie who took home $224,190. This is the first ever Monster WPT Tournament of champions title for the US pro, and he made it by outlasting 63 greatest poker player of the world. This simply is amazing.

Yachou was very happy after winning this great shot for the first time in his poker career and said that I can’t believe that I’m the winner, it just a dream comes true for me as a player, sitting right in front of world’s best poker players, and I would have been glad if I finish 30th “Yachou” said.

Here are the final 6 players of the WPT Tournament of Champions:-

As mentioned earlier total 64 players participated and generated more than $1 Million of pool prize, out of which 31 survived on Day 1 of the event. Yachou was the chip leader of the day 1 and played outstandingly well to win this championship title.