Mohamed Samri, a professional poker player from France won the Estrellas Poker Tour season#7 Main event played in Barcelona. According to the deal in between him and the runner up of the tournament named Teunis Kooij from Netherlands, the winner collected €353,220 and the trophy, whereas the runner up of the game collected a whooping €372,060, which was more than winner’s amount.

The buy in for the ESPT Barcelona Main event was €1,100 and it attracted a hugh field size of 3,447 entrants, meanwhile total prize pool generated was €3,343,590, which was distributed in top 695 finishers.

The eliminations of the Main event Final table were as follows:-

An Irish poker pro named Daniel Wilson, was the one who got off and couldn’t be able to do more than just having his seat booked to ninth position.

The first elimination from the final table was of Norway’s Lars Farstad, who failed by ace and queen to Kooij and got busted to eighth position for an amount share €62,300.

Jerome Brion,a pro from France and a chip leader of day 3 hit the rail to seventh place for €87,350.

Jean-Marc Bellini from Switzerland hit the rail and completed his journey to sixth position and took home €125,450.

Another pro from Norway Marius Enebakk hit the rail because of Chris Moorman play. He pocketed €163,800 from the tournament. 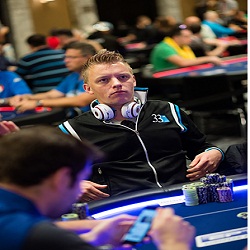 Runner up of EPT Barcelona #7

Ireland’s Nicholas Newport was short against Kooij’s pair of fours. He then had queen-jack and busted to fourth plac for a winning share of amount €202,420.

The three handed game included some of the top player such as Chris Moorman, Teunis Kooij and Samri. They all were doing well until UK’s Chris Moorman, lost almost all his stack and went to hold third position for €241,300.

Then the game of final two (heads up) was in process. A lot were happening in between Samri and Kooij and finally they decided to make a deal which said, Mohamed Samri will take the title of the championship for €353,220, whereas Teunis Kooij will take home €372,060, being Runner up.