A professional poker player from France Mr. Rodolphe Rey, wins the WPT national Marrakech poker tournament and cash prize of worth $102,714. The main event of WPT National Marrakech was underway to the Casino Es Saadi 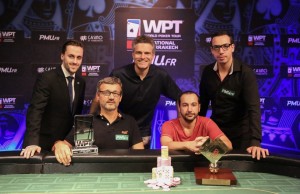 in Marrakech. The total number entries to this particular super poker tournament were 462, to which Rey got first prize and took home $102,714.

Now after this Rey, has qualified for the PMU.fr main event to which the buy in is €120. Rey defeated an English player named Benjamin Dadon, who took home a cash prize of $71,900.

Player who were in the games to check their lady luck and destiny were such as La Fouine, The French Rap star, Camel Meriem, a French footballer and Guillaume Darcourt, a WPT champion.

Here are some other players got some prizes as well:-

2nd prize and place goes to a player named Benjamin Dadon, who booked for $71,900 of cash prize.

Fourth position of the main event and a cash prize of $36,464 goes to Romaine Lewis.

The 6th position of this WPT national poker championship belongs to Christian Guiodo and he generated $23,111 of cash pool prize.

The 7th position of the tournament is for a player named Fred Coranso who made $18,489.

Whereas the 9th and final position of the game/tournament is booked for a player named Huu Truong, who made a very good $10,785.

The high roller game of the poker open got 78 entrants and total collected cash pool prize was $153,224.