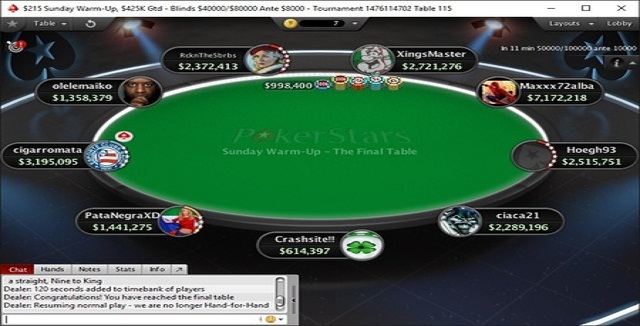 XingsMaster of Germany has won the PokerStars Sunday warm Up event took place on 28Feb, 2016. The Sunday Warm Up event of $425K Guarantee attracted 2,368 entrants throughout the world but German pro did great work and won the title as well as collected $74,828.

He defeated Crashsite!! Of Netherlands, who took down his winning share of amount $56,202. Top 342 places were paid out.

Although XingsMaster did not had much chip counts when playing at final table (2721276 ) but played outstandingly to add more than $74K to his account.

After eight and half hours of play top nine finishers/survivors with their chips counts and seat plans were as follows:-

The first elimination from the final table was of PataNegraXD ($4,025), in the ninth hour of the game. He faced the trouble due to 50K/100K ante 10K took place.

After few minutes of play Russian Maxxx72alba got busted at eighth place for an amount take home $6,867. And olelemaiko hit the rail to seventh position for $11,603.

The heads up round took place in between two top remaining players in the tenth hour of the play i.e. XingsMaster and Crashsite!!.