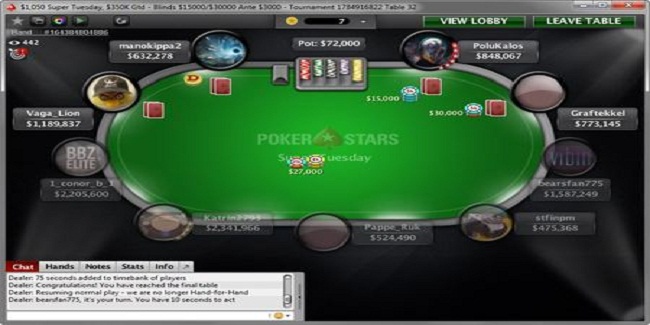 Rob “Vaga_Lion” Akery, a professional online poker player from United Kingdom wins prestigious Super Tuesday event took place on 1/10/17 at PokerStars. He pocketed a sum of $68,463 as first prize and the title of the match for the first time.

Conor “1_conor_b_1” Beresford of Netherlands satisfied with his second position and collected an amount of $63,980 from the deal.

Latest tournament attracted 426 players from players of around the world including UK, Netherlands, Brazil, Greece, Mexico and most of the European countries and generated $426,000 as total prize pool. As usual top 62 finishers et paid at this particular $1,050 buy-in No Limit Hold’em event.

Previous Sunday Million champion Fred_Brink busted to 63rd place and couldn’t able to do more. Final table of the game was set just after nine and half hours of play took place.

First player hit the rail was stfinpm of Romania. He busted to ninth place just a couple of hands took place. He made $6,368.65 from the title.

Brazilian manokippa2 goes for third for $41,061.75 and then after this removal, the game took place for over 30 minutes and there were no results. Two remaining players at heads-up i.e. Rob “Vaga_Lion” Akery and Conor “1_conor_b_1” Beresford decided $6000 for the winner.