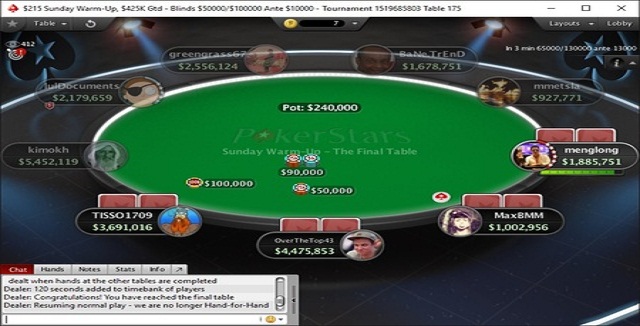 The final table was set after nine hours of the play completed. The finalists were as follows:-

The first one to leave the ground was MaxBMM of Ukraine, just after seven minutes past of final table. He collected $4,095 and completed his journey to ninth position. He had 8♠8♦, with him, whereas TISSO1709 had A♥K♦. The board was 4♥ T♣ 3♣ 5♥ 2♦.The second elimination from the final table was of Estonian mmetsla, who took home $6,986 and finished at eighth place.

Next man to hit the rail was lulDocuments of Mexico for an amount $11,804, playing against OverTheTop43’s. He booked for seventh position.

The sixth position of the Sunday Warm Up was for Chinese menglong, playing against OverTheTop43. He was able to make $16,622.

The heads up round took place in between greengrass67 of Hungary and TISSO1709 of Austria. They both played well, but it was greengrass67 who made the difference by his playing at arena. TISSO1709 leaded the way till the end but greengrass67 made a great come back in a very few hands by winning the first prize of amount $76,124, whereas the runner up collected $57,175.