This is simply excellent. An Iranian poker pro Hossein Ensan has won the EPT Prague main event. This is his 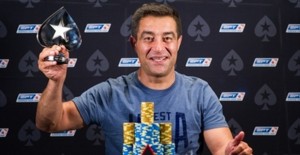 third final table participation to EPT since last year. Now he has done things in his favor by winning at the €5,300 Main Event and took home €754,510 ($825,660). Total number of entries to this particular No Limit event was 1,044 to which Ensan did really well and topped the field. This was his third final table appearance in last one and half years.

Previously Ensan finished for 3rd place at EPT Barcelona and 6th place at EPT Malta last year. Ensan is now crossed to $1.2 million playing at different live poker tournament. Ensan was very happy and said that I’m having fun right now after winning the best shot of my life. He played out 115 hands to make a deal with his opponent versus Tremzin’s who comes second and took home his winning share amount of $792,831.

As mentioned earlier there were 1,044 players participated to the main event of the game but all of them got eliminated from time to time and last six players were at the final table as the game started on final day of the event. Ensan was at 5th place and managed to play the game in his favor. Total live earning for Ensan is increased to $2,035,229.

Deposit €50 and receive €100 as bonus at titanbet poker

Here are the final table participants and their winning share amount:-