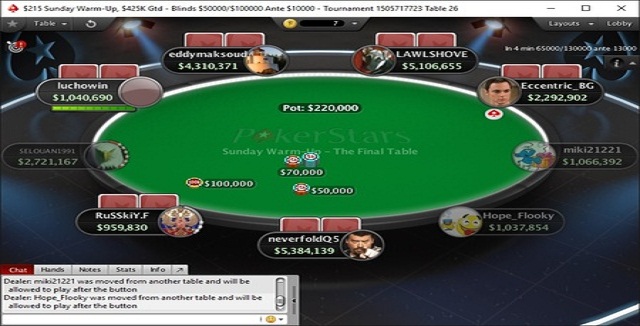 Miki21221 of Israel won the premier Sunday Warm up on March 27, 2016 and collected the first prize of amount $58,000. Eccentric_BG of Bulgaria was the runner up of the event and total amount to his name was $47,000. 2,414 players participated to this weekly tournament hosted by PokerStars and generated a cool prize pool of $482,800, out of which top 360 places were paid.

The final table was set after many hours of game played/completed and it was like:-

First elimination was of Russian RuSSkiY.F, who took home $4,103 and was at ninth position. Mexican LAWLSHOVE was out of the game at eighth place for $7,000, whereas “eddymaksoud” secured his seat to seventh position with total $11,828.

It was chilean luchowin, who made a mistake and caught behind with total share won $16,656 and completed his journey to sixth position. Whereas the fifth and fourth places were gone to Hope_Flooky and neverfoldQ5. They both collected $21,484 and $46,789 respectively.