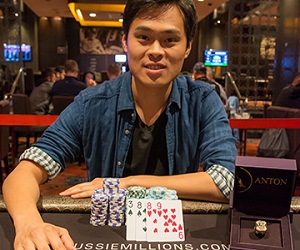 All final table players were good and were looking to win the title for themselves, but it was Chen who did the job ultimately and collected the first prize.

England’s Richard Ashby was the only player who got some cash from this tournament. He completed his journey being at third position and made AUD$16,535 or (USD $12,212) from the championship.

Most of the players from Australia participated in the tournament and they became collector of some amount.

The first player who busted from the field was Canadian Ari Engel. He hit the rail to seventh place for a total winning share of amount AUD$7,565. Engel couldn’t manage to do what he did in his previous playing.

Next player who got off from the table was Ryan Van Sanford of United States. He made UD$9,130 from the game being sixth.

Fifth place was for a player Norway and the name was Preben Stokkan. He eliminated with AUD$11,090.

Top four players remained in business were from Australia alone. Shoshiro Karita busted to fourth place for AUD$13,445, Dejan Boskovic got third for AUD$17,365, while the Runner-up Henry Szmelcer got out with total $26,775.

Aussie Million is one of the prestigious poker tournaments in Australia, which is being hosted every year at Crown Entertainment complex located in Melbourne.