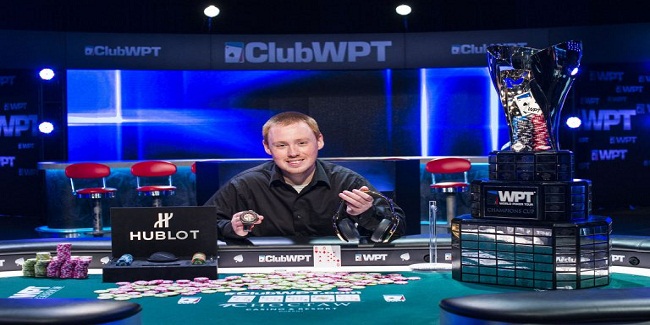 James Mackey, a pro poker player from the United States has won the season XV of the world poker tour’s Choctaw and collected the first prize of amount $681,758. The main event of the tournament took place at Choctaw Casino Resort, which attracted some of the best players at the final table. By winning this championship title Mackey also collected a seat to the season ending world poker tour’s tournament of champions.

Benjamin Zamani was the runner up of the game and was able to take home at least $412,234 from the tournament. Zamani was once dominating in the game, but it was Mackey who wins the championship title after a close clash in heads up round. Lifetime poker earnings for Mackey are now more than $3.5 Million.

The final table includes some of the best players such as Craig Varnell, a winner of 2015 WPT500 at Aria resorts and casino, who here booked for third position and collected $306,346.

The final table and eliminations:-

Matthew Smith was the one who hit the rail and seized for sixth place. He pocketed $134,720 from this particular tournament.

Then after his another US player named Jack Doung got busted to fifth position and made $175,122 from the table of the main event.

Bastian Fischer made $230,300 from the event and finishes his journey at fourth position.

The three handed game included James Mackey, Benjamin Zamani and a player who have done quite well in previous years named as Craig Varnell.

Due to a clash among those three the first one who hit the rail was Craig Varnell for third position playing against James Mackey. Varnell was able to made $306,346 from the game.

It means the heads up round was in between James Mackey and Benjamin Zamani and it was Mackey, who won the championship title after a few decent card arrivals. He collected $681,758 + a seat to WPT Tournament of championships, to which the buy in is $15,000, whereas Benjamin Zamani, pocketed $412,234 being runner up.