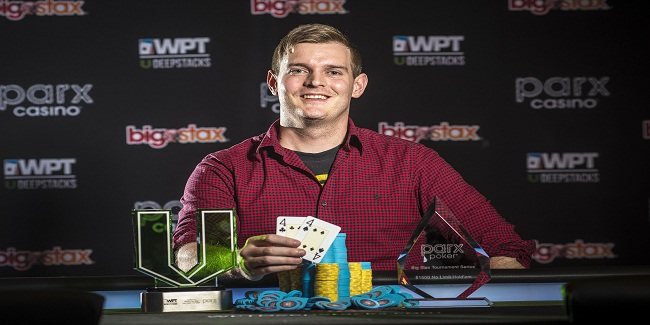 A professional poker player named James Poper has won season 4 WPTDeepStacks Big Stax XX of buy in $1,600 Main event for $201,991. The runner-up of the event was a player known as DJ MacKinnon/, who collected $127,800 from the heads-up deal.

The tournament took place at Parx Casino in Bensalem, which attracted 660 players throughout the world. Total prize pol for the tournament was $957,300. Most of the total prize belongs to Poper.

This is the largest cash win for Poper, who played outstandingly till the end of the day and became the champion of the title.

After winning the tournament poker said “it was a long day of poker” and it is a great win for me playing against top professional poker players at the table.

The first player who busted from the final table was Bob Vernarec, who made $15,987 from the game for his ninth place, however Raffaello Locatelli busted to eighth place for a total winning share of amount $20,199.

Seventh, sixth and fifth places were for players known as Jason Ritchie, Jay Sharon and Thomas Maquire and they pocketed winning shares of amount $26,326, $34,271 and $45,567 respectively.

Phillip Hui hit the rail to fourth for $60,980, Justin Liberto busted from the table after that. He was at third place and pocketed $83,285 from the game.

Three handed game lasted about an hour and then goes Justin Liberto to third place. Poper just didn’t win the championship title, but he also got his seat booked automatically for season ending WPTDeepStacks championship of buy-in $3,000.