The Final table for EPT Prague 2015 is set and players like John Juanda( Indonesia), Steve O’Dwyer(Ireland) and 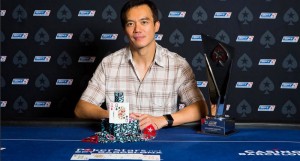 Dzmitry Urbanovich(Poland) are among the finalists. The event is €50K Super High Roller.

Earlier top poker players like Anthony Zinno, Byron Kaverman, and Jason Mercier got eliminated at the Day 2 of the super high poker event of buy in €50,000.

You know that European poker tour Prague for the year 2015 is currently in process at Hilton Hotel in Prague. This is one of the largest poker tournaments hosted by Pokerstars.com and EPT in Europe. The main of final event of the tournament is for €50,000 Super High Roller to which total 56 entries generated a cash pool prize of €2,688,840. The cash will be distributed to top eight players of the main event. In total 56 players, there were 46 fresh entries and 10 were reentries.

Top eight players currently holding their positions at EPT Prague 2015 are as follows:-

Kaverman, a top pro and a GPI, Player of the year got busted at Level 13 of the tournament for a bad beat. Another poker pro of the United States, Anthony Zinno made his way to exit due to the preflop by Urbanovich .

The Day 2 of the game saw lots of eliminations and fluctuations. The Day 3 of the final table will be kicked off 12:30 p.m. and will continue till the winner is announced and crowned.