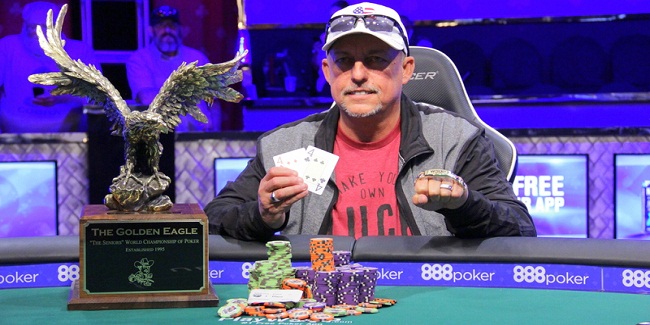 Johnnie Craig, a 54 year old Restaurant Owner from Galena Park, United States has won the event#27, which was a $1,000 buy in No Limit Hold’em Senior Championship of WSOP 2016. He collected $538,204 as winning total along with his first ever gold bracelet, playing at World Series of poker.

The event received a massive field size of 4,499 entries and generated $4,049,100 as prize pool. Out of that much players, top 675 players paid out. A Movie producer from Timonium Jamshid Lotfi was the runner up of the event and took home a cool $332,413, as prize money.

In an interview after this great career win Craig said that “I kept my head down till the final table and I’m happy that I did it like a charm”. It’s great and amazing, I can’t tell you how happy I’m, he said.

Craig is a businessman and do plays poker sometimes. Before operating his own restaurant, he served 25 years in U.S Military and even had multiple tours to the Afghanistan and Iraq.

Iranian Jamshid Lotfi was the runner up and took home $332,413. Roger Sippl was third place holder with $245,389. This was his biggest cash in any poker tournament till date. Abe Somerville, from Sierra Madre was eliminated to fourth position and got a total winning share of amount $182,536.

Canadian Mike Lisanti completed his journey to eighth place for $60,392, whereas the first elimination from the final table was of Alan Cutler, from Chicago, who collected from Chicago as winning prize. This was the event#27 of the tournament, we will let you know all the details about future events and their results here at real poker online or best uk poker sites.