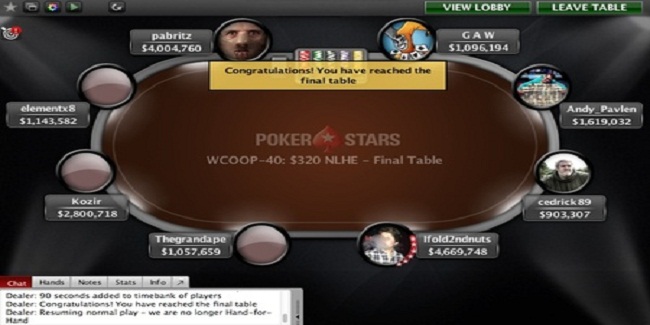 Top 215 finishers of the event at least took home some amount of money. The runner up of this particular 8 Max No Limit Hold’em was a player from Netherlands named Ifold2ndnuts, who made $52,255 from the tournament.

The winner and the runner ups were decided after a three way deal took place among top three remained player to do business. They were Kozir (Belarus), Ifold2ndnuts and a Brazilian Pablo “pabritz” Brito Silva, who becomes third for $62,000, according to the three way deal.

The event was one of the best and attracted Hugh number of players from entire world. Total 107 players remained in business on the end of Day 1.

Some notable players, unable to make themselves to the final table but collected some money were JACKPOT786 finishes 16th, earning $2,900, followed by DENV3UR (15th), alberto ka (14th) and camerofelix (13th).

The Final table of 8 Players took place and they were:-

The first play busted from the final table was Romanian G A W, who made $7,803, being eighth, then goes Bolivian Thegrandape for $10,852 and secured seventh place.

Meanwhile after most of the players got eliminated from the race of the championship title, top three players remained in to play and they all were looking to down the title. They were Brazilian Pablo “pabritz” Brito Silva, Ifold2ndnuts and Kozir (Belarus).

They all lasted to at least half an hour and finally it was Silva moves out from the table by having $62,000.

Here at real poker online, you will get exclusive poker news, updates, high payout sites and legal online poker websites of UK, check this out and do come back to read more.