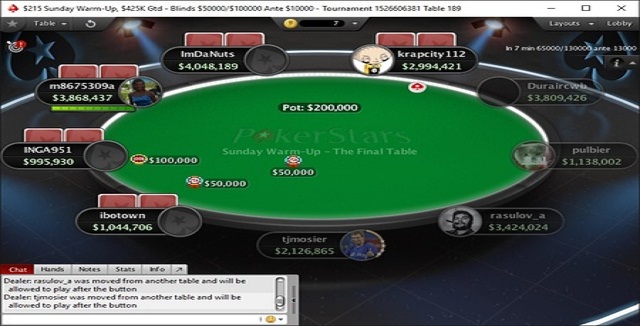 After playing more than nine hours the final table was set for top 9 players and they were as follows:-

The first elimination was of INGA951, a pro poker player from Norway took home $4,020, playing against the opponents. He fixed his position to ninth place. The eighth place was for Canadian krapcity112, who took home $6,858.

Then goes Austrian ibotown with total amount share $11,588 and completed his journey to seventh position. The sixth place, fifth place and fourth places were for Duraircwb (Brazil) $16,318, pulbier (Netherlands) $39,180 and Chris “ImDaNuts” Oliver of Costa Rica with total winning share of amount $39,060.

The third place for this particular Sunday warm up event belongs to another Canadian poker pro tjmosier, who got off with $40,155. He was playing against m867509a call and got busted to third position.