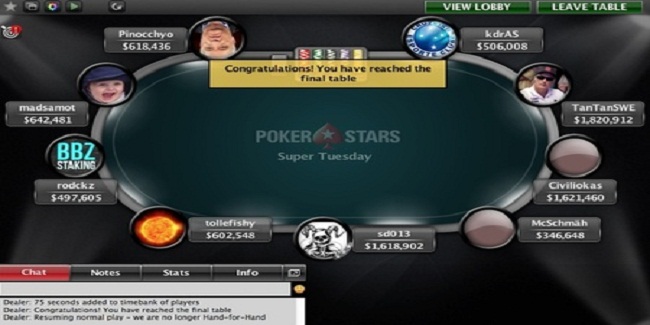 A pro poker player from Norway Mads “madsamot” Amot has won the latest edition of super Tuesday event and collected the first prize of amount $63,518. The tournament is a big hit among poker players. The tournament took place on 7/12/2016 and received 331 entries from around the world and generated prize money of amount $331,000. Top 54 finishers of the game get paid.

The $1,050 buy in No Limit Hold’em is one of the most popular events o at the internet the days at PokerStars, which attracts thousands of professional poker players from the entire world including UK, US, Canada, Spain, France, Israel, Germany and others.

There were 18 players remained in the business after two hours of the play and final table of the game which included top nine players were as follows:-

The first elimination from the final table was of a Brazilian poker player named as Rodrigo “rodckz” Motoki, who hit the rail to ninth position and collected $5,494, next one to go was Pinocchyo from Germany for a winning share of amount $7,447 and booked to eighth place, whereas Ukrainian sd013 collected $10,757 being seventh in the list.

Meanwhile third position goes to Civiliokas from Lithuania for $34,775.