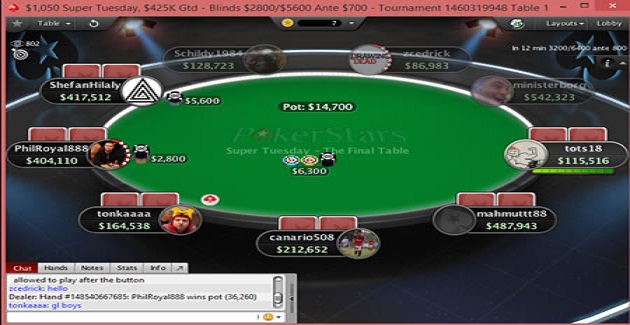 Mahmuttt88, an online poker pro from Finland wins the first prize of the Super Tuesday event played on 9th February 2016. The $1,050 buy in No Limit Hold’em event attracted 515 entrants which generated a cash prize pool of $515,000 and top 63 places go paid.

“Mahmuttt88” of Finland tops the field size and collected an amount of $97,850, as first prize. He defeated another pro “ministerborg” of Denmark and the former TCOOP Winner, who got his share of an amount $72,100.

The final table was formed after eight and half hours of game. The final 8 players looking to win the title of the championship were as follows:-

The first elimination from the final table after a few hands was of a player from Austria named as Alexander “Schildy1984” Debus. He took home $8,549 and finished at 9th position of the event. “tonkaaaa” of Canada was at 8th place with an amount take home $11,587.

Sixth and seventh position were for players of tots18 of Canada $21,887 and , Sergio “zcedrick” Aido of United Kingdom who finished at 7th place and takes down his share $16,737.

mahmuttt88 kept the momentum up and was playing aggressively and that’s why ShefanHilaly of UK got out from the table and collected $28,325 as winning share.

Just after two more hands of ShefanHilaly elimination from the table canario508 took the lead over ministerborg , but could not be able to complete and hit the rain. He finished at fourth place. The Argentinian player got the winning share of amount $40,170.

Ministerborg won the two primary and significant pots but ministerborg checked the big blind and hit back with to win the title of the event.