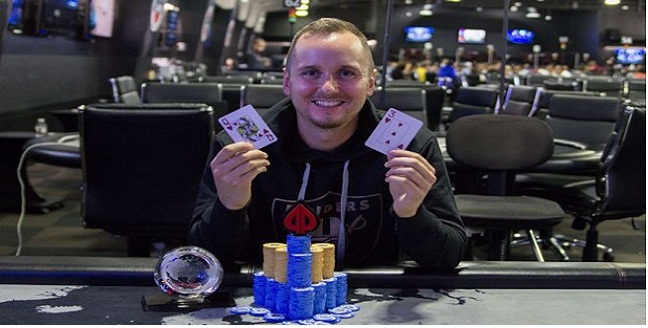 A Novermenr Niner Marc-Etienne McLaughlin has won the 2016 world cup of cards and took home the first prize of amount $76,830. It was the event#22 of the series for a buy in $5,000 No Limit Hold’em 8-Max, to which McLaughlin did a great job and topped a field size of 44 players.

The Day 2 of the game began on its scheduled time i.e. 2 p.m. inside Playground Poker Club and the first elimination from the final table was of Pascal Lefrancois. He hit the rail in early time and becomes the fifth position holder in the game with a total winning share of amount $21,320.

The next man to go was Martin Raus, who made $27,750 from the world cup of cards and collected $27,750, being at fourth place, meanwhile Francois Goulet finished his journey at third position. He made $34,150 and was down to third.

The heads up was among Marc-Etienne McLaughlin and Pierre-Paul Paulin, but ultimately it was McLaughlin, who made himself through to the top position by winning the prestigious trophy of largest buy in of the year 2016 and collected $78,830.

Pierre-Paul Paulin, who was very close to win the title once but couldn’t be able to do more than being a runner up for a total winning share of amount $53,350.

Before the beginning of the final table on Day 2, it was Chanracy Khun, who got busted to sixth position and didn’t made to the final table. He was unfortunate, because even after shoving preflop with ace-jack, McLaughli had a big blind with blind with pocket queens, and this made him out of the race to final table.

As mentioned earlier this was the largest buy in event of the world cup of cards inside Playground Poker club. Be with us at real poker online for every single news regarding either online or offline poker and we shall provide you the utmost information.